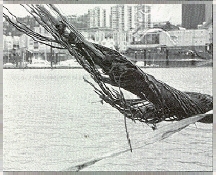 More and more news outlets are starting to pick up on the story of the recently damaged submarine cables. Information about the damages to the cables has been garbled and determining those basic necessities of (responsible) reporting has become difficult. Who, what, where and when? Reports of the numbers of cables affected are now ranging from 5 cuts to 9 cuts. Most major news outlets are sitting in the 4-5 range while others (usually a bit more independent) are playing in the higher numbers. There are acronyms a plenty and information strewn from message boards to major news sources.

As a concerned citizen I found that it was very important to trace these stories to their sources and do my best to give you the most accurate information on what appears to have happened in the past couple of weeks underneath the waters covering most of this planet we call home.

I hope that I can help to shed some light on this subject and help to ease rumors and misinformation that seems to run rampant when events like this occur. So, in good reporting fashion, we will split up the cable crisis into an easy to understand format which will, (hopefully) help for those of you still swimming through the mess that has been made.

There have been a number of reports with estimates of the number of people affected. The following table provides some of those numbers. Just click on the number for the source:

Renysys.com has offered some excellent technical information into the countries affected by the Mediterranean cable breaks. Who is Renysys? From their website:

“Our optimized algorithms gather real-time data from the Internet backbone, around-the-clock. We analyze the major Internet transit providers and compile objective, comprehensive information into real-world statistics on regional trends and route selection in the retail, wholesale, and backbone markets.”

You can check additional technical information by visiting their blog and looking in their archives.

The submarine cables, that you are probably aware of by now, are communications lines which help transfer data, such as: voice, internet & multimedia, long distances underneath the seas and oceans covering this planet. Laying these cables is no small task. The amount of cable required and the sheer size and weight of the cables call for some of the larger ships on the sea. This is a photo from Wikipedia of the René Descartes (though examples of other ships can be found here and here): 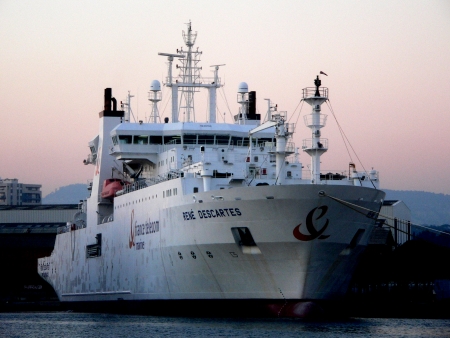 The maelstrom of stories falling around the internet are all about damages that have occurred along the cables. There have been a range of speculations as to how the cables may have been damaged. These speculations range from collision with anchors by ships in a storm, to international conflicts.

There are three major submarine cables that have been damaged. The cables can be easily confused given the spread out nature of the news sources of the internet and the number of acronyms that there are. Here are the three cables, along with the links to the official websites, in question: 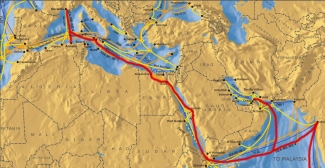 These are the cables that were damaged in just a few days. Repairing the cables can take weeks. In 2006 we were privy to an unfortunate example of how these cables can be damaged when the country of Taiwan was shocked by the highly destructive Hengchun earthquake, and the aftershocks that followed. Some sources have, unfortunately, pointed to this as an example of just how often underwater cables are damaged. Alcatel-Lucent has a pretty good animation of the repair process (they are also the source for the maps on this page):

No major natural disaster can be blamed for the recent internet outages — though there are those who have attributed the damages to ships dragging their anchors along the bottom of the oceans in inclement weather (not a disaster, albeit natural).

As far as this author can tell, there have been 9 cuts that have been reported on, at least, three different days.

Well, there you have it: the most complete guide to the 2008 internet outage available. I hope that this article was successful in helpful you understand the submarine cables mess that has been created on the internet. Now if only we could get the “Why” portion of this guide completed. At least now you have the facts. Maybe now, others can start working on why this may have occurred.

If you liked this post, be sure to subscribe to my RSS feed and check out my other posts on the subject as well.