[UPDATE – 02/12/08 – The Complete Guide to the 2008 Internet Outage has been finished. It contains the most up to date information including detailed images and explanations to help unravel this cable mess. Please check it out here]

First off, I want to thank everyone for the positive feedback that I have received for my last post, which illustrated the locations of the 5 submarine cables that have been damaged over the past couple of weeks. I’m glad to see that some news sites such as Slashdot featured my post and that people are starting to take a critical look at what is happening.

[UPDATE: this post was recently featured in the most recent Epic-Fu video episode. Check out the video here, and join the discussion here.]

That being said, I’m sure that everyone is eager to read the results of my findings on why these cables may have been damaged, who has to gain from the damages, and where we, as concerned citizens, should start to look for answers.

Before I begin, I would like to point out that these findings are from my own research. I am not accusing anyone of anything here. I am simply providing a resource for the rest of the internet so that people can start to investigate what may really be happening over there. There are some facts out there that are just too big to ignore. While I may not be the person capable of asking the big questions to the right people, I can still provide information for the people who can.

First of all, I want to revisit the map of the cable damages that have occurred over the past few weeks:

We have been told by various organizations that these damages are attributed to power failures or by an anchor being accidentally dragged along the ocean floor during a storm. However, it doesn’t take more than a 5th grade education to start to recognize that there may, in fact, be a pattern to what we are seeing here. When something like this occurs, it starts the mind roaming around the possibilities as to why this may have occurred.

Well, there are a few possibilities. Here are the top 4 possibilities/connections that this author was able to find in his research:

In talking to a network operations manager about the damages that have been done to the cables, the first companies that he suggested, which stand to gain from this type of damage, are the larger telecommunications companies. Especially the land-based ones. Here’s why: when a huge pipeline providing tons of information to a particular area is damaged, re-routing almost always occurs before repair. This means, that the companies which surround the outage or are within the outage area stand to benefit from the sudden jump in needed bandwidth.

So, which companies have some ties into this mess? Well, there are a few companies that popped up while doing my research. However, for the scope of this article, let’s look at Verizon Business. To start things off, Verizon partially owns the SeaMeWe-4 (along with AT&T) cable that was severed. According to them the repairs could take days but they were going to offer an alternative network as quickly as possible. Alternative meaning, routing through somewhere else. How else might Verizon be involved with this deal? Verizon Business has ownership in many of the submarine cables that have been in recent news. In addition, they began work in 2007 on a new cable that will render others obsolete. The construction for this is supposed to complete this year. (source) By Verizon Business’ own admission, they’re all about getting global:

“Global Strategic Services Still Driving Solid Verizon Business Growth…Global sales of strategic services such as IP, Ethernet and managed services continued to accelerate dramatically during the past quarter, exceeding declines in revenue on a year-to-date basis from traditional core voice and data services. In the fourth quarter 2007, strategic services generated $1.4 billion in revenue, up 25.1 percent from the fourth quarter 2006.”

With all that said, it seems very likely that Verizon would very much want these cables to be damaged. Whether it be to leverage their land-based networks or to further increase the popularity of their new cable, it’s hard to ignore the connections.

In December of 2007, there were a few events that occurred related directly to the damages that we have recently seen. While these events may be unrelated and/or random, the correlation is hard to ignore.

December 1, 2007: Alcatel finished its merger with large U.S. telecom company Lucent. Why does this matter? Alcatel provides hardware and service to large telecommunications companies. In fact, according to their Wikipedia entry they are a “leading provider of optical transmission equipment, especially for submarine communications cable.”

“The combination of Yipes’ enterprise Ethernet services; the private undersea cable system of FLAG Telecom, a subsidiary of Reliance Communications; and Reliance’s commitment to expansion and growth will enable the creation of a global service-delivery platform with unmatched coverage and capability.”

December, 2007: Iran announced that they were freely trading oil without the use of the U.S. dollar. More details about this a bit later in the post.

While there were other notable events in the global telecommunications field in 2007, December seemed to be particularly full of events that could possibly be related to the recent submarine cable damages.

Reliance Communications is the leading broadband service provider in India and part of another massive group of companies known as the Anil Dhirubhai Ambani Group. Together, they are delivering service to over 19 million subscribers. One of the companies belonging to this group is called Reliance Power Limited (RPL). Here again, we see a direct tie into a large mostly-considered U.S. company. It’s a little company called Chevron.

How big of a stake does Chevron have here? How about a 5% (that can increase to 29%) stake in RPL? (source) Why would Chevron be interested in an Indian energy company? Jamnagar. That link leads to the Wikipedia entry for the Indian state. That link, however, does not talk about how important a role RPL plays in that state — important read as: 650,000 barrels per day. But that’s just the refinery that is currently there. RPL is working on a new refinery that will have a capacity of 580,000 barrels a day. That’s 1,230,000 barrels of oil money that will be coming out of Jamnagar every day. It is expected that this refinery will be completed this year. (source)

The Anil Dhirubhai Ambani Group is far too large to try and track down the various connections that they may have to the Middle East, but, being that it is one of the companies most tightly knitted into this knot of submarine cable woes, they deserve a mention.

This brings us to the number 1 reason that this author has found which could explain the recent submarine cable damages.

Through the research that I have exhaustingly done over the past few days, this is the one that has struck me as the most likely reason for the damages that have occurred to submarine internet cables.

First, a bit of background. A bourse is a, typically European, word which refers to a stock exchange. Great, so Iran is going to have their own “oil stock exchange,” but why does this matter? The Iranian oil bourse was going to be a stock market for petroluem, petrochemicals and gas. What’s the big catch here? The exchange planned on being ran with currencies excluding the U.S. dollar. If you remember from earlier in the post, Iran stopped allowing purchases of their oil with the U.S. dollar in December of 2007. So, obviously, the U.S. is not going to be happy about this. The biggest piece of information linking this to the recent damages is the proposed location of the bourse: the island of Kish. This is the island that is RIGHT NEXT TO at least two of the cuts that have recently occurred: 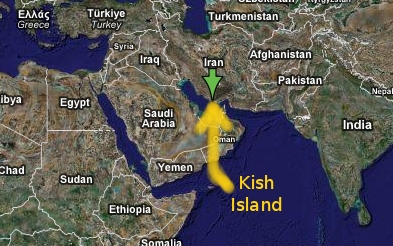 And the locations of the cable damages once more: 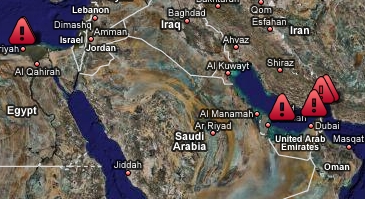 To make matters even more interesting, the bourse was scheduled to open this month.

Some of you may suddenly be thinking to yourselves that this sounds familiar. That’s because the last person who decided to stop using the U.S. dollar for trading oil was a man by the name of Saddam Hussein in the fall of 2000.

[UPDATE: To further add to this argument, this would not be the first time the U.S. would have disrupted submarine cables to further themselves in times of war or conflict. (Operation Ivy Bells) (Previous NSA Submarine Wiretaps)]

As I said before, these are bits of information that hopefully others can use as a resource to determine the true cause of these massive internet outages that we have seen over the last couple weeks. I am not blaming one source or the other. I am simply helping to increase the awareness of what may really be happening right under our noses.

“Whoever undertakes to set himself up as a judge of Truth and Knowledge is shipwrecked by the laughter of the gods.” – Albert Einstein

If you have additional information or updates to this, please drop me a line. My email address is writer at ilovebonnie.net.

Well, that’s it for this post. If you liked this one, be sure to subscribe to my RSS feed or check out some of my other posts.