While we enjoy a great many things down here in the Virgin Islands, one of the things we do lack of is some of the common conveniences that many take for granted back on the mainland. One of those wonderful things was the introduction of Netflix streaming capabilities.

Having the ability to stream television shows and movies from Netflix is incredibly handy. Many of us pay for the DVD and/or Blu-Ray service already since it’s sort of a necessity considering our spotty coverage of movies that come out in the theater (another minor inconvenience). Those of us living in the Virgin Islands with a Netflix account were, understandably, a bit annoyed when we received and email back in November of 2010 about a rate increase. The reason?

You can imagine, then, the delight when an email arrived in many of our inboxes towards the end of the day on the 30th of June: 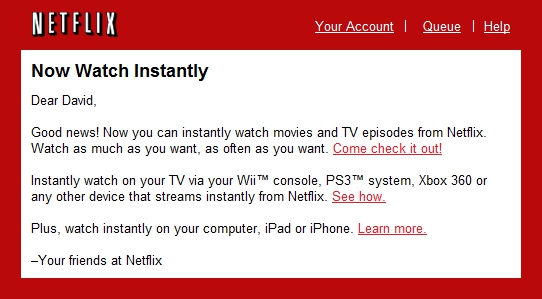 Could it be true? Could Netflix really be offering streaming to the Virgin Islands now? A quick hop over to netflix.com and a small Silverlight install later proved that, indeed, Netflix was now streaming their content to the U.S. Virgin Islands.

Let’s just hope what little bandwidth we have on this island, doesn’t get sucked dry because of it.