There has been a shooting reported shooting at Radford University. The suspect was seen at the Bonnie. The initial shooting is reported to have occurred on Calhoun and Madison.

Students received calls and text messages letting them know that they should seek shelter and that the city was looking for a black male with a do-rag, no shirt, and a camo jacket. I spoke to a University student who is currently seeking shelter in her dorm room at the University. On her way back from the 7-11, there was apparently a long line of cop cars which seemed odd to her, for a Thursday evening. Police have not confirmed what they were investigating but it is almost certain, at this time, that it was a shooting.

She confirmed that a friend of hers was nearby when it occurred and that he was very shaken up by it.

“I can’t believe our school doesn’t send an email out.”

“Think of how many parents are freaking out right now.” 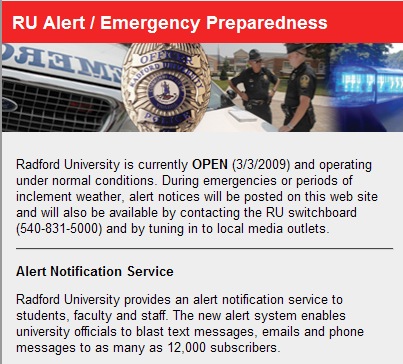 The shooter is, apparently still loose as students have not received any indication from the University that it is safe to leave their shelter.

“There are still people walking around campus that have no idea. Some people didn’t even get notified.”

More as the story develops.

10:29pm EST: sources say that there was one victim shot nine times and that the suspect was last seen in or near the Bonnie. This has not yet been confirmed by any officials.

10:54pm EST: . The University still has no information posted to their alerts on their website. News sources say tactical teams were deployed in a couple of University buildings. Students reporting that a building check will be occurring. The initial shooting is reported to have occurred on Calhoun and Madison. Confusion and distress evident as students turn to their University website and find no information.

“Command center established. no further sightings of supspect[sic]. stay in rooms and lock doors. Further updates to follow.” Still no updates on the University website.

Radford University Police are asking that all RU students stay indoors and lock their doors. The RU community is urged to refer back to this page, radford.edu, for instructions and updates. Radford University police are patrolling the campus seeking a suspect involved in a shooting earlier this evening. Two connected alerts have been issued and the campus is now considered “locked down.”

All media are encouraged to report to Lot ZZ, adjacent to the Dedmon Center where further information will be made available.

11:24pm EST: no further reports on any additional shootings beyond the first. Currently, one victim was confirmed to be shot in the chest. The victim was taken to the hospital and reports indicate that they did not survive the shooting, though no official word, yet.

12:13am EST: CNN has confirmed the death of the victim in the shooting.

Another TXT update from University@11:34pm EST:

“No further sigtings[sic] of the suspect at this time. Building searches are ongoing. Stay in your room and lock doors.”

RADFORD — The following message was distributed by the ConnectEd system to campus subscribers at 11:34 p.m.: “Attention. RUPD and the Radford City Police have established checkpoints and a command center. No further sightings of the suspect at this time. Buildng searches are ongoing. Stay in your room and keep all doors locked. Updates to come.”

11:30 p.m. — Attention — RUPD and Radford City Police have established checkpoints and a command center. SWAT teams will be entering academic buildings to continue the search for a suspect involved in an off-campus shooting incident who may now reportedly be on the RU campus. All Radford University students are asked to shelter in place by staying in their rooms and keeping their doors locked.

All media are encouraged to report to the Joint Information Center in the Dedmon Center, which can be accessed from the Administrative entrance off of University Drive.

1:30am EST: another update from the University that there are still no sightings of the shooter.

2:53am EST: another txt message update from the University@2:10am EST:

“Police are still checking and clearing buildings. Stay indoors with the door locked. updates to continue”

RADFORD — Attention. RU PD and Radford City Police are continuing their search and clearing operations of academic buildings. There are no further sightings of the suspect to report. Further updates will be issued on the RU cable television system. Students are reminded to stay in their rooms and keep doors locked.

Please be advised that there are students on campus who are sheltering in place in secure academic buildings at this time.