My routine in the morning is simple:

I like my routine; it works for me. I was never a morning person for most of my life. I was always the one who stayed up late and slept in until the afternoon. I was a night owl; bartender. Late night MMORPG player. Programmer and hacker. The night time was my right time.

Something changed within the last year or so. I don’t know what it was, but things are different now. The day greets me and I am always eager to return the gesture. Maybe I’m just getting older. I am turning 30 in two weeks. I have lots of thoughts and feelings around this. Changes, milestones, and goals are suddenly becoming important to me in ways I never thought possible.

Upon checking Hacker News this morning, a story struck me with joy. The Commodore 64 was turning 30.

I have the logo for the Commodore 64 tattooed, prominently, on my left shoulder. It has been a huge part of defining who I am, as a person, and where my life has taken me. I shared a story with the Hacker News community, in the comments thread, that I feel deserves repeating here, on my blog.

I’ve got the logo for the Commodore 64 tattooed on my left shoulder. It began my love of computers at a young age that has been with me for my entire life. I turn 30 in 2 weeks. I feel glad and honored to share a birthday so close to something that has affected my life so much. It’s fun to know we grew up together.

When I was just shy of 3 years old, my father brought home some greyish-brown television-looking thing. He had purchased it from a co-worker of his, along with a bunch of games on floppy disks and cartridges, a joystick, and a KoalaPad. He turned on the computer, some sounds happened, and a blue screen eventually appeared with a flashing prompt and the word “Ready.”

He fussed through some manuals and papers to find the boot sequence necessary to start something called Jumpman. I watched, in fascination, as he was able to manipulate these things on the screen. Various beeps and boops emitted from the machine and a little stick figure climbed ladders and dodged various objects. He quickly died in the game.

He started to show me other stuff this thing was capable of. KoalaPainter was absolutely wonderful. I could draw and manipulate shapes on the screen as much as I wanted; as if I was using a piece of paper.

He couldn’t get me away from the thing. Eventually, bedtime came around, and I cried as I was torn away from something that I was completely enamored with.

Around 2 or 3 in the morning, my father awoke, hearing weird noises coming from the basement. He groggily stumbled down the stairs and into the room to find his 3 year old son, covered with a blinking glow, sitting at the keyboard. After watching him perform the boot sequence only a couple of times, I had it memorized, had gotten up from my bed, and was sitting there playing games.

Silent Service. Kickman. Heist. These kicked off a long and wonderful obsession with technology, computers and video gaming. They defined who I would be as a child; a self-professed, proud nerd and geek. Dungeons and Dragons, Magic the Gathering; the whole nine yards. 286, 386, 486. Oak Technologies. Math co-processors. Sound Blaster. Voodoo. Serial cable LAN parties playing Doom. Betrayal at Krondor. Ultima VI. BBS. MUD. The first time I saw a GIF. Links. The Nintendo Entertainment System.

So many absolutely wonderful memories that I wouldn’t trade for anything. The Commodore 64 was absolutely integral in defining who I have been and who I continue to be. Without it: I have no idea where I’d be in this world.

I’m a software developer now. I’ve been programming since I was in grade school. I picked up a software application development degree just because I thought it may be handy someday. I grabbed a theatre degree, because it was my other passion I discovered at a relatively young age.

Computers have always been in my life, through thick and thin. They always do exactly what you tell them to do. Nothing more, nothing less. Humble machines that push electrons around to provide entertainment, fascination, communication and now, connection.

Thanks Commodore. I owe you one. Happy birthday. 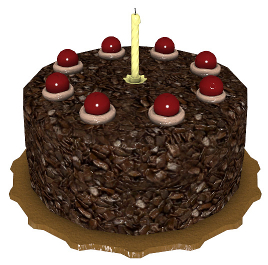 If you liked this post, please consider following me @randomdrake or subscribing to my feed.