As elections draw closer and closer we find ourselves inundated, whether we like it or not, with political garbage.

Racism, hatred, slashed tires, vandalism, voting machines reversing votes. It used to be that we would turn on the news and see other countries where elections were held like this.

Now, we get to see this happening in our own nation.

During this time it is important for Americans to ask the following question:

We all feel that we know the right news station or news source to watch. Some people enjoy propaganda and others prefer a more balanced look. It is evident in the blind stares of the worshiping masses that seem to gather wherever the Republican campaign lands. Am I the only one who feels that they are akin to the giant mega-church sermons that we see on T.V. or hear about in the news? When religion gets behind politics then failure is inevitable. Why? Because you cannot govern a nation of people with mixed faiths upon a bastardization of religious ideology. It just doesn’t work. Yet people are tied to them believing that they are leading a “nation of Christians” against the “Muslim terrorists” to defend the “forces of good.” This is just from the snippets that I have seen from their political rallies and from the supporters that attend them.

We’re really going to let this person run the country: 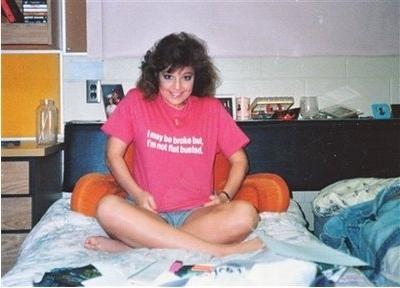 In case you can’t read it, the shirt says: “I may be broke, but I’m not flat busted.” Yes, she was apparently that girl in college.

Barack Obama was quoted as saying:

“If I were watching Fox News, I wouldn’t vote for me, right? Because the way I’m portrayed 24/7 is as a freak! I am the latte-sipping, New York Times-reading, Volvo-driving, no-gun-owning, effete, politically correct, arrogant liberal. Who wants somebody like that?”

Everyone needs to step out of their own bubble and change the channel or pick up a different newspaper once in a while. It may be painful at first, but you’ll be a better person for it. This is especially true right now as the upcoming election determines the fate of the world. The freedoms that make this country great are slowly being taken away and abused in small bits of pieces during legislation so laden with pork you’d think the stacks of papers would grow curly tails and oink when passed.

The first military unit of around 5,000 troops has already been trained and deployed in the United States. We’ll see how long it takes until the first story appears where they are being used to assist in crowd control.

If our own military doesn’t get us, then maybe the private military will:

Just within the last few months and reported just a few days ago, the Federal government has found it important to spend time and effort to put pressure on medical marijuana facilities in the state of California. Even while we fight against the powers that be, they strike at us by attacking our weak and powerless. While we are spending billions of dollars at war in other countries we’re spending millions in our own communities on war with ourselves.

You have a responsibility to inform yourself and others about the dangers that are present in the country that we call home.

Since 9/11, one of the things that has confused me is the inability for our military to find/capture/kill Osama Bin Laden.

It does not make logical sense that the most powerful military in the world would have so much trouble finding one man. This is especially true considering how successful we have been in finding others.

I’ve always had a gut feeling that there was something else going on, until now.

For the first time ever, a Delta Force leader has donned a complete facial transformation to talk about how his unit was just moments away from capturing/killing Osama Bin Laden on camera. He decided to share his story after discovering how wrong the media was regarding Bin Laden.

“Dalton Fury,” has a new book due out this week entitled, Kill Bin Laden. He says that the proceeds will go to the Special Operations Warrior Foundation.

It’s good to know that our military wasn’t the failing point.

I would provide a transcript but it just doesn’t show you how stupid this video makes her look (sorry about the advertisement, but it is probably full of more content and intelligence Palin in the interview):

“…as ‘Poohtn’ rears his head and uh, comes into a-, the airspace of the United Stehts of Euh-mehrica. Where do they go? It’s Eh-laaaskah…”: was the serpentine hand gesture when trying to explain the leader of Russia really necessary? How about the little finger point and a dont’cha know it’s Alaska that’s they go to with the squinted eyes. Governor Palin: do you really think that the reporter was unaware that Russia was in close proximity to Alaska or are you just talking to hear yourself speak? I’m fairly sure you’re incapable of realizing the former, so I’m gonna go with the latter. With all due respect, last I checked the Russian navy was not training near Alaska.

This is the person the Republican party expects to negotiate with world leaders when our economy is failing, we have conflicts across the globe and countries have already lost respect for the U.S.A.

A bumbling, stumbling, uninformed embarrassment to the American people. Even if she isn’t elected, it’s an insult to the American populous that such an obvious fool would be even considered to help run the country.

If you thought Bush was bad, Palin will make your head spin.

I feel like I’ve seen someone respond to a question like this before. Oh wait, I remember. Miss Tean USA from South Carolina:

Seriously, is this a joke?