That’s what I really wanted the title of this article to be.

The federal drug war has done what it does best and put another medical marijuana patient through agony, anxiety, and defeat for the few remaining months of their life.

Scott Day was an awesome guy. The picture above is from an article that was written in the Missoula Independent. I wrote about Scott and his wife Summer being arrested back in February of this year. Scott and his wife were growing medical marijuana and were raided by the police. I had the opportunity to meet Scott and Summer and they are two of the nicest people you could ever have the chance to meet.

Sadly, Scott left us yesterday. Thanks to the arrests and the federal drug war that claims the lives of hundreds of thousands of people each Scott got to worry about his impending court case and the police for the final months of his life. All because he wanted to feel some comfort from the disease that afflicted him.

Despite this devastating blow, Summer Day, is still facing the charges that stemmed from trying to take care of her late husband.

Please, join the fight and contact the county to petition to stop the prosecution of medical marijuana patients and their loved ones.

The departments for Beaverhead County in Montana where the cases are being held can be found here:
http://www.beaverheadcounty.org/html/departments.html

They released a statement in regards to the passing of Scott Day. It deserves to be reprinted here:

Reeling from the news that Scott Day, a beloved member of its statewide family of patients, died unexpectedly yesterday, Montana’s medical marijuana public education and patient support group today blamed prosecutors and the local drug task force for contributing to his death – and called on Beaverhead County to drop the charges it has brought against Scott Day and his wife, Summer.

“Those of us who knew and loved him are well aware that Scott Day’s health has plummeted steadily ever since Beaverhead County began prosecuting him. His final six months of life were plagued with constant fear and anxiety thanks to the government’s unwillingness to show compassion and to comprehend the nuances of Montana’s medical marijuana law,” said Tom Daubert, founder and director of Patients & Families United.

“Scott Day suffered egregiously at the hands of his health condition, and the last thing he needed was the added, stressful burden of being a defendant facing the possible loss of his vitally needed healthcare insurance coverage. But this functional death sentence is precisely the draconian outcome that Beaverhead County prosecutors actually sought, using taxpayer dollars every step of the way on a witch hunt right out of the Dark Ages,” Daubert said.

“There is no question but that this totally unwarranted prosecution contributed mightily to Scott Day’s untimely death,” he emphasized. “Now that Scott has died, we call on the county attorney to drop his charges against Summer Day and recognize that all ongoing persecution of medical marijuana patients must cease in this state,” he said.

Daubert noted that the entire law enforcement process involved in the Scott and Summer Day case demonstrates the “colossal and continued waste of scarce taxpayer dollars used to chase, arrest and demonize suffering patients who desperately need marijuana as medicine and who just want to be left alone to tend to their private healthcare challenges.”

“Overzealous and misguided law enforcement agencies have made local, state and national taxpayers complicit parties to this debacle in Dillon,” Daubert charged, noting that all the costs of the unnecessary prosecution have been paid by Beaverhead County residents, and that costs of the drug task force’s “inexcusably faulty” investigation were borne not only by all Montana taxpayers but also in part by the entire nation, since a National Guard helicopter was employed at one point in the process.

“When Senators Baucus and Tester, and Congressman Rehberg, rushed to restore funding to drug task forces, were they told that taxpayer dollars would be used to terrorize horrendously sick patients like Scott Day, who are just trying to improve their lives under Montana’s medical marijuana law?” Daubert asked.

Daubert reported that medical marijuana patients all over Montana “are reacting to the tragic news with a fully justified combination of fury and anguish. Every one of us who has known Scott and Summer Day loves them dearly, and together we call on Beaverhead County to shut down its prosecution immediately, today.”

Scott Day suffered from muccopolysaccharidosis, a rare congenital condition that deformed his body and brought him unrelenting, constant pain and a variety of other severe conditions. He needed multiple strains of the marijuana plant to relieve his varied symptoms, and his use of medical marijuana contributed greatly to his quality of life and ability to function. The southwest Montana drug task force claims it conducted an intensive three-month investigation – at the end of which the task force still had no grounds for a search warrant, and still didn’t know that Scott was sick nor even that he was married. The task force then violated Montana trespass law to snoop on his private property without a search warrant. Beaverhead County law enforcement officials later brought multiple felony charges against Scott and his wife – charges which, if successful, could have eliminated Scott’s eligibility for the healthcare insurance that was vital to his survival.

Scott Day needed more than $40,000-worth of enzyme and other healthcare treatments every month in order to survive in the face of his rare medical condition, Daubert explained. Medical marijuana helped alleviate the suffering that these treatments couldn’t quell, he said.

“Using taxpayer dollars, Beaverhead County sought a functional death sentence for Scott Day by bringing charges that could have ended the healthcare treatments that kept him alive,” Daubert reported. “Now that their persecution worsened his health and killed him before a fair trial even began, we call upon the county attorney to stop wasting his county’s tax dollars to further torment Scott’s surviving wife. Summer Day has suffered too much already,” Daubert concluded.

Scott Day’s prosecution by Beaverhead County defied both Montana law and the expressed will of the Montana public. In 2004, Montana voters made medical marijuana legal by a vote of 62%, the largest margin of support for such a compassionate policy ever achieved in the U.S. In Beaverhead County, voters supported the measure with 55% of the vote. Today, approximately 1,080 patients in 37 Montana counties are registered as medical marijuana patients based on recommendations from more than 160 different physicians.

So please, do your part. Spread the word. Contact the county. Don’t let this happen in your own state. Don’t let the drug war claim two victims with one blow.

Reddit.com recently posted a story linking to the court docket where there was a denial of a motion to make the divorce papers of Governor Palin’s husbands business partner confidential. This was after the National Enquirer broke the story that Governor Palin was hiding an affair with one of her husband’s business partner. Unfortunately, the servers went down soon after that (reddit/digg effect). However, ilovebonnie.net got a hold of of the information. Here you go folks. This is a mirror of what was at www.courtrecords.alaska.gov today: 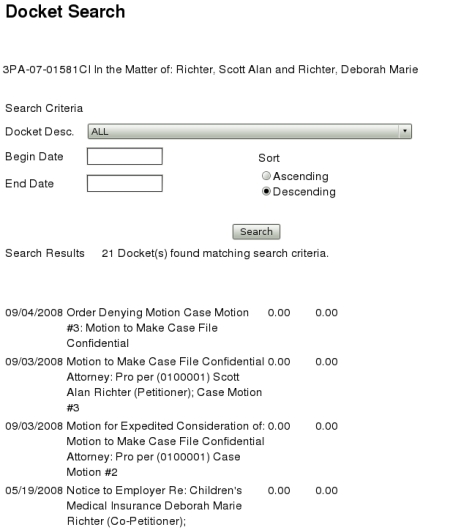 Here’s the full text from the page:

Dockets include limited information about filings and hearings that occurred before CourtView was installed in the court.

I wrote a bit about the new nomination for the Vice Presidential pick right after the news broke. You can check out my other article here:

According to the CBS news blog, the McCain campaign had this to say:

““The smearing of the Palin family must end. The allegations contained on the cover of the National Enquirer insinuating that Gov. Palin had an extramarital affair are categorically false. It is a vicious lie,” said McCain senior adviser Steve Schmidt.

“The efforts of the media and tabloids to destroy this fine and accomplished public servant are a disgrace. The American people will reject it.””

The National Enquirer has been right when breaking news of affairs before. Let’s see how this one pans out.

Sarah Palin has been selected by John McBushCain to be, quite possibly, the second most powerful person in the world.

Now everyone across the nation is saying to themselves: “Who is Sarah Palin?”

Perhaps the second question running around is “Why is she fit to be the next Vice President of the United States of America?”

Well folks, it doesn’t really seem that she is. At least not in the opinion of this blogger.

Here are 6 Good Reasons Why America Does Not Need Sarah Palin as Vice President:

How can we expect countries like North Korea, China, Japan, India, Afghanistan, Iran, etc. to show us any respect on the global front if they are seeing the one of the leaders of our country plastered on a beauty magazine?

Those are just 6 reasons. But they are reasons enough for me. Please do not vote for John McCain for President in 2008. If McCain wasn’t bad enough, his pick for VP certainly isn’t even close to an ideal candidate either.

If you enjoyed this post, then please consider subscribing to my feed.